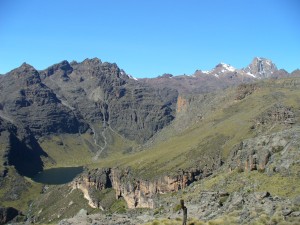 At 3am next morning Evans woke us up. I was in a deep sleep and sitting up quickly, I knocked the frozen perspiration from the roof of the tent on to us – a sort of frozen shower! We dressed, had a cup of tea and packed our gear. The three of us started out to the summit of Point Lenana with the intention of getting to the 5,000m summit for sun rise at 7am.

We could not see much and the torches were more a comfort than useful, as it was pitch dark and the torch light simply reflected back from the darkness. Evans never missed a beat and we simply followed in his footsteps.

It was a steep walk with many stops – “Poli, Poli” as they say, which means “Slowly, Slowly” in Swahili. At that height, no matter how fit you are, it is difficult to draw breath as you ascend and you have to keep to a pace that makes sense. In many ways it was good that we could not see the steep ascent as we did not have to measure our progress visibly!

As we approached the top of Point Lenana, the sky brightened up and we could see that there were other people there who had ascended by other routes. The cairn is a white painted rock with a large metal cross (a gift from the Pope in 1930) and a star and pennant. The area is rocky and barren with steep crags around and large ice-sheets down the sides. We found a good area at the top, out of the cold wind, and waited for the sun to come up.

In some ways it is like a great religious ceremony. There is a silence, and people speak in whispers as the sun moves over the edge. Everyone seems to feel the wonder that we are on a mountain, at the top of our world, looking out over a cloudbank that covers central Africa. And we are waiting for sun rise. When it does break over the edge it is a surprise and it all happens very quickly. The colours traipse over the cloudbank, red and orange and hues of blue, and the shadows are chased by orange light around the crag of Nelion and they seem to slide behind the mountain into their night. The snow lights up and the sky takes on the African blue and you look around and everyone seems to have a lit-up tan, and everyone is smiling. Then the cameras click and people take photos of other groups and the conversation is louder as if we have all survived and have this great communion in common. Evans pointed out the other peaks below us, Macmillan, Coryndon and Delamere and the deep valleys of Gorges, Hobley and Teleki. We could see Howell Hut near the top of Nelion and the leaning tower of Point John from further around the mountain.

We started down towards Austrian Hut, slipped and scrambled a bit, laughed a lot from the whole exhilaration of the morning and then said “to hell with it,” sat on our bags and slid down the snow field over the Lewis Glacier. It was dangerous but a lot of fun! We had breakfast at the Austrian Hut and sat out on the rocks as we ate, looking at the immense views of the Lewis Glacier, the whale mouth of stalagmites and stalactites at the bottom, and the steep face of Nelion. Evans has led groups up Nelion and Battian, and pointed out the complex route – a climb that requires advanced mountaineering skills. We then started the descent to Shipton’s Camp. 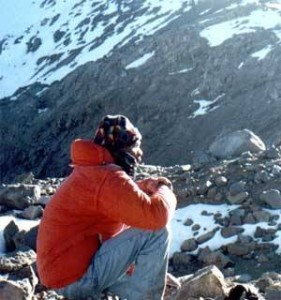 I have never much cared for walking down-hill. I always look forward to it when I am climbing up-hill but after an hour or so I feel cheated. You have to watch each step more carefully and you cannot look around and observe the world in quite so casual a way.

We heard later than one of the people at the top broke an ankle coming down and another got snow-blindness, and we heard that someone got mountain sickness and had to be rushed down. I call these “survival stories” as I have never walked a high mountain without someone having a story of disaster! Even so, taking basic precautions is imperative. The hut at Shipton’s Camp was fairly crowded with people setting out and the rest of us coming down from the mountain. There were small groups from many countries and there were those who livened the evening up with songs and conversation but everyone was in bed early and we had a comfortable night.

A big thanks for making our trip so successful. Your team were amazing, supportive and very professional and treated us with such respect!.

We had the best trip earlier this year. We booked up through GotoMountKenya - Evans was our correspondent, and he is absolutely reliable, and wonderful! He organised everything for us on Mt Kenya, and then took us to Tanzania for our Mt Kilimanjaro adventure.

We really wanted to inform you, that we had a great time on the mountain. We were really well looked after and could enjoy every single minute whilst on Mt Kenya trek. Frances is a very skilled cook and we felt like being served in a five star restaurant every single day. The porters, Samson, Harrison and Peter were always good for a laugh and really helped us getting up the mountain by carrying all the necessary equipment as well as much of our stuff. Daniel always made sure that we could en…

We had the best trip earlier this year. We booked up through GotoMountKenya – Evans was our correspondent, and he is absolutely reliable, and wonderful! He organised everything for us on Mt Kenya, and then took us to Tanzania for our Mt Kilimanjaro adventure.

A big thanks for making our Mt Kenya trip so successful. Your team were amazing, supportive and very professional and treated us with such respect!. .