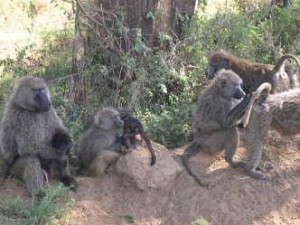 My team and I are up by 6.00am and we start preparing breakfast so that by 8.00am we will all be out of camp.  Today we are doing the peak circuit.  This is one of the most exciting trekking routes not only in Kenya but in East Africa.

This is surely going to be a demanding day but the spectacular views of the peaks and glaciers from all angles is more than rewarding. Breakfast is pretty heavy including eggs, cereals, fruits, toast, sausage, tea/coffe/hot chocolate. By 7.00am breakfast is on the table and the climbers are now taking their fill.

Meantime the helpers are busy fixing their breakfast which is always done with incredible speed and style after which they pack and share out their luggage.  By 7.30am some of them are already on their way to our next stop which is Austrian Hut. Once I’m through with my breakfast, I head to the caretaker’s room and check out everyone and pay all the relevant bills. By this time the climbers are through with breakfast and we are now  leaving Shipton.

We follow the path west of the main peaks going up the valley to reach Kami Camp and then continue up a long scree slope to reach the Hausberg Col (4590m) followed by a long descent to Hausberg Turn and Oblong Tarn.  We then follow the path between the tarns, then up to the col between the summit of Authur’s seat and the western terminal.  We continue our descent via Nanyuki Tarn from where we cross  the Two Tarns Hut dropping further to America Camp.  The view of the peaks from Nanyuki is spectacular.

From American camp (4350m) we ascend on the Narumoru route via a long scree slope.  This is quite a long and hard climb as we scramble and switchback gaining an estimated 600m leading us to jumbled blocks and emerging at Austrian Hut (4800m).  This trek takes 6 hours.

Austrian hut is windy and temperatures can sometime drop to minus zero degrees.  On arrival soup and hot drinks are waiting and we take a rest and enjoy the view of the peaks.  Most trekking groups attempt Point Lenana from Austrian Hut and so do the technical climbers headed for the normal route on Batian/Nelion.

By early evening the winds are now quite fast and it starts getting chilly.  It’s time to change to warm and dry clothes.  A couple of layers of warm clothing is now a MUST! After changing to warm clothing, I’m now going to get feedback on every climber’s condition so that I can evaluate their potential for going up Point Lenana.  A lot of rest is required at this stage. That’s why I have to leave the climbers and return to the kitchen to make sure that dinner is ready early enough.

For this night we prepare pasta, beef stew, vegetables, and fresh fruits followed by hot drinks.  I also make sure that more water is boiled for the climbers to continue hydrating. I’m keen on checking out mountain sickness symptoms at this point.  After dinner it’s “Lala Salama” (goodnight) for the climbers as they retire to bed.

We now quickly fix our own dinner comprising of ugali (a type of corn meal) with vegetables, followed by black tea and then retire to bed.  As usual the helpers recount the activities and episodes of the day before we start dozing off one by one.  It’s a chilly night but with a full stomach it’s a goodnight.

This website uses cookies to improve your experience while you navigate through the website. Out of these, the cookies that are categorized as necessary are stored on your browser as they are essential for the working of basic functionalities of the website. We also use third-party cookies that help us analyze and understand how you use this website. These cookies will be stored in your browser only with your consent. You also have the option to opt-out of these cookies. But opting out of some of these cookies may affect your browsing experience.
Necessary Always Enabled
Necessary cookies are absolutely essential for the website to function properly. This category only includes cookies that ensures basic functionalities and security features of the website. These cookies do not store any personal information.
Non-necessary
Any cookies that may not be particularly necessary for the website to function and is used specifically to collect user personal data via analytics, ads, other embedded contents are termed as non-necessary cookies. It is mandatory to procure user consent prior to running these cookies on your website.
SAVE & ACCEPT